Please be advised that XplorPak 2021 has now been retired as an active product and will no longer be maintained or updated.

To find up to date information, please visit the Regional NSW website:

Early European settlement was initially focused on survival rather than the economic prosperity that followed the discoveries of coal, tin, iron and gold ore. Food was needed to feed the settlers and convicts, however the land around Port Jackson proved unfertile, prompting exploration west to the Parramatta area, where better soils yielded successful crops, principally wheat – a different kind of gold.

But the discovery of gold drove the development of Australia's enormous mineral wealth and the ensuing population explosion of the 1850s. The discovery of gold was first recorded in Australia on 15 February 1823 by assistant surveyor James McBrien at Fish River, between Rydal and Bathurst in New South Wales. In 1839, the explorer Sir Paul Edmund de Strzelecki reported finding gold in the colony, most probably in the Wellington–Bathurst district, and in 1841, the Reverend WB Clarke also reported gold, copper and iron ore. These reports as well as many unconfirmed reports of gold west of the Blue Mountains, prompted the colony’s governor to press in 1849 for a Geological Surveyor to be appointed to New South Wales — which at this time included the area now occupied by Queensland and the Northern Territory.

Charles Smith Wilkinson, the first government geologist of Victoria, was appointed the inaugural head of the Geological Survey of New South Wales (GSNSW) in 1875. His coloured map, compiled in 1875 and published in 1878, of the Hartley–Bowenfels–Wallerawang–Rydal area was the first geological map to be issued by the Department of Mines. Exploration continued with T.W. Edgeworth David who mapped the state’s tin and coal fields in 1882–1891, discovering rich coal deposits in the Hunter Valley. 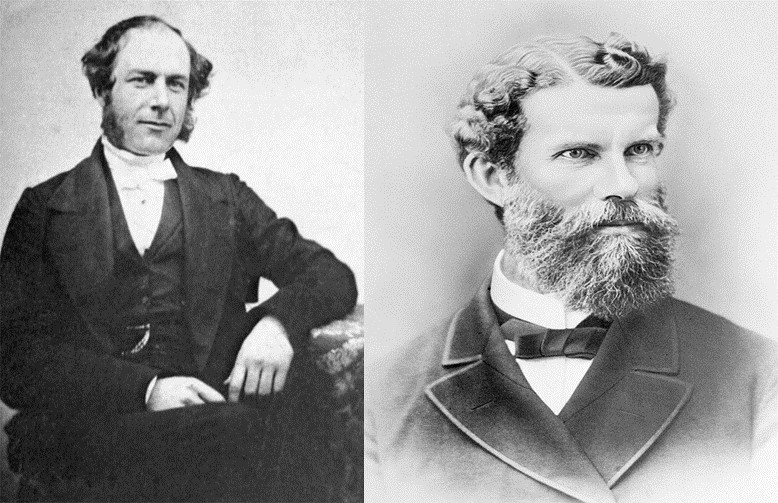 In 1850 Samuel Stutchbury arrived from England to take up the post. He conducted extensive surveys, with an emphasis on gold deposits, until his return to England in 1855. His work, along with that of W.B. Clarke, formed the basis of the first geological map of the state, issued in 1880.

Geological sketch map NSW 1880
This first New South Wales geological map was compiled from Reverend Clarke's original map by C. S. Wilkinson and issued in 1880 by the Department of Mines.

Many other geologists profoundly influenced our understanding of the state’s geology and mineral resources. These included E.C. Andrews, an expert on mineral deposits, and J.E. Carne, whose comprehensive documentation of mines and prospects was indispensable many decades later in preparing mineral occurrence databases and metallogenic maps.

Discovery of the Broken Hill ore deposit in 1883 changed the emphasis from gold to base metals and extensive droughts, such as those of the late 1880s, again expanded the GSNSW to include underground water supplies.

Geotourism also had its place; even in the early years, as the limestone caves such as those at Jenolan were explored and mapped. A draftsman at the GSNSW, Oliver Trickett, even prepared a guidebook to the caves that was used for many years. In 1893 his new edition of the state geological map was published and won a medal at the Chicago Exhibition.

Various studies were completed and published in the years before the First World War, including the Prospector’s Guide. This was produced to help the unemployed affected by successive droughts, floods and low prices of base metals. Water continued as a focus for Australian governments, as it does to this day, with five Interstate Conferences on Artesian Water being held between 1912 and 1928. The conferences, instigated by New South Wales, also included geologists from Victoria, Queensland, South Australia, Western Australia and Tasmania.

In 1914 another edition of the state geological map was completed, again drafted by Trickett. Further west, a new survey of the Broken Hill mining field was started in 1918 and completed in 1920. Technological developments in the 1920s led to a new science: geophysics, and in the 1930s aerial photographs were added to the technical resources available to the GSNSW.

The Second World War led to a demand for strategic materials such as tungsten, molybdenum, coal and copper and was followed in the 1950s by record mining figures thanks to the worldwide demand for base metals and coal. Increasing populations were stretching infrastructure and the Mount Kosciuszko region was mapped by GSNSW for dam sites for the Snowy Mountains Authority. There was increased cooperation between companies, government departments and universities in jointly sponsored exploration. In 1962, the geological map of the state was published at 1:1 000 000 scale and by the end of the 1960s, most of the state was mapped in more detail at 1:250 000 scale.

Towards the latter half of the 20th century, the focus of the GSNSW moved from a consultative role to a broader, regional, scientific role and in 1973 an update of the 1:1 000 000 state geological map was published. In 1974, a map based on a new concept — plate tectonics — for the first time showed the structural regions and tectonic history of the state. Another new area of investigation was marine geology, involving estuarine surveys and studies of the offshore continental shelf.

Rapid developments throughout the 1970s and 1980s in computing power and storage allowed information to be analysed in greater detail, enabling more accurate deductions about the type and orientation of rock formations and buried mineral deposits. Geophysics expanded into seismology, gravity surveys, radiometric surveys and geomagnetism. Geochemistry developed into a science in its own right. High resolution geophysical and satellite imagery proved to be powerful tools in interpreting regional geology at, and below, Earth's surface.

Methods of displaying information also benefited from computing advances. In 1993, the last hand-drawn map of the GSNSW was produced, and by 1994 computer aided drawing (CAD) systems were in use. By 2000, geographic information systems (GIS) were adopted by the GSNSW and recent work has included 3D modelling of the subsurface. The mapping undertaken by the GSNSW will continue to develop and adopt new technologies, laying the groundwork for future exploration in poorly understood areas of the state, where rocks are buried under deep cover.

Today, maps, books, 3D models, apps and data are available from the GSNSW, with many downloadable or accessible from its website. MinView provides a single portal to access geoscientific data, and DIGS® provides an online archive of reports, maps and other publications.

In 2019, a major milestone was the release of the first NSW statewide seamless geology dataset ‒ a compilation of the best-available digital geological mapping.